What would it take for you to confront your greatest fear?y

What if your greatest fear was staying a silent, obedient observer as evil burned everything you ever loved?

From Village to Factory Town

In the 1940s, Westwood was a small, hilltop village; by the dawn of the 90s, it was a factory town. With the arrival of Alegra Pharmaceuticals, almost every resident in the area came under the company’s employ. Its Westwood branch produced everything from painkillers to anesthetic.
Peter Bennet was always skeptical of the corporate giant. It was a machine-monster that ate away at the old village’s soul, and more importantly, his family’s happiness. Consumed by his work, it took only the smallest hint to lead him to the truth – that buried beneath the layers of Alegra’s promises and progress, lurked something truly horrible. The truth is often difficult prey, but he was a detective and he knew how to hunt it. He wouldn’t stay silent in the face of evil. He would bring the truth to light kicking and screaming, even if it meant he would lose his mind.
Is it a coincidence that now, his family is dead?

Years later, a mysterious phone call will bring Peter back to Westwood. Dark and abandoned by Alegra and its residents, only fear remains: Peter’s memories, the deadly shadows clawing at his mind, and the answer to a mystery that could explain his family’s death.

The Last Resident of Westwood

Westwood Shadows features combat, riddles and puzzles, and a story-driven experience draped in mystery and heavy atmosphere. Survive the shadows and guide Peter to the truth behind Alegra, what happened to Westwood and his family’s death. 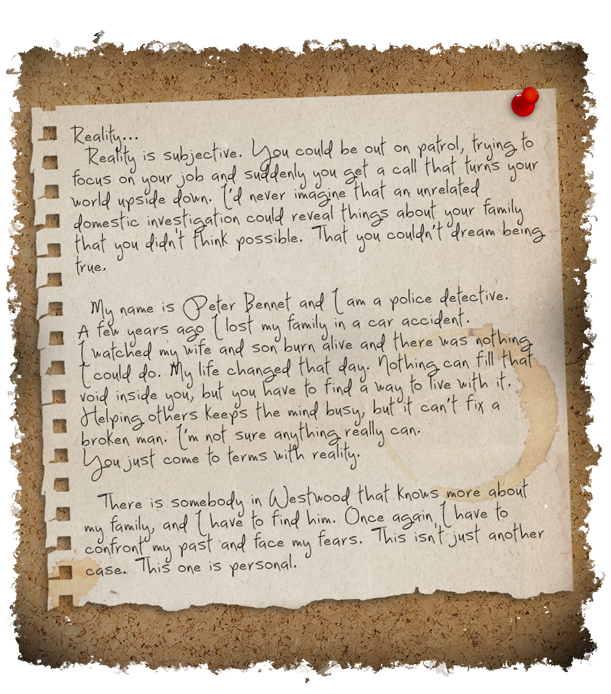 Westwood Shadows explores the story of Peter Bennet, who gets involved in a surreal mystery in his abandoned hometown. Soon, he finds that not everything in Westwood is what it seems, that there are deadly shadows clawing at his mind, and that the mystery might have more answers than he wants to know.